I was trying to play several new games on Linux and quickly became obvious there aren't many clear, up-to-date examples of how to configure Linux for optimal gaming.

First of all, I'd like to address that there are several distros purported to be built for gaming. While this may be true for many people, unfortunately if you're on newer hardware, in general those distros do not give you the most current kernel or packages, which will undoubtedly cause you problems...

We recommend Fedora, followed by Arch for gaming. Fedora probably takes the least work to get going. Also be aware Manjaro is only loosely based on Arch so we don't recommended it. If you're on PopOS! and Ubuntu and having great success—great! However we don't recommend these distros, either.

Note, this was originally written for Arch, and adapted for Fedora. Please let me know in the Discord if you find any ploblems.

I'm now using Fedora, which does a lot of the prep for games for you (as you'd expect with Fedora). The /etc/environment settings are still useful, however.

Please feel free to contribute! I most certainly am not the expert on this topic, just trying to work out how to play games! 😊

Updates should be posted to this blog article, please also update the Changelog below.

If your screen has FreeSync or supports variable refresh rate (VRR) and you use Wayland (you really should use Wayland) ensure you're running the latest Mutter (version 42.5.vrr.10-1 on Fedora 36 at the time of writing).

This fixes a bunch of potential screen/cursor lags, as well as halved refresh rates on external monitors. I've been on the beta for several weeks and it's been great.

gamemode is no longer needed, there's no advantage over the regular performance governer/scheduler. 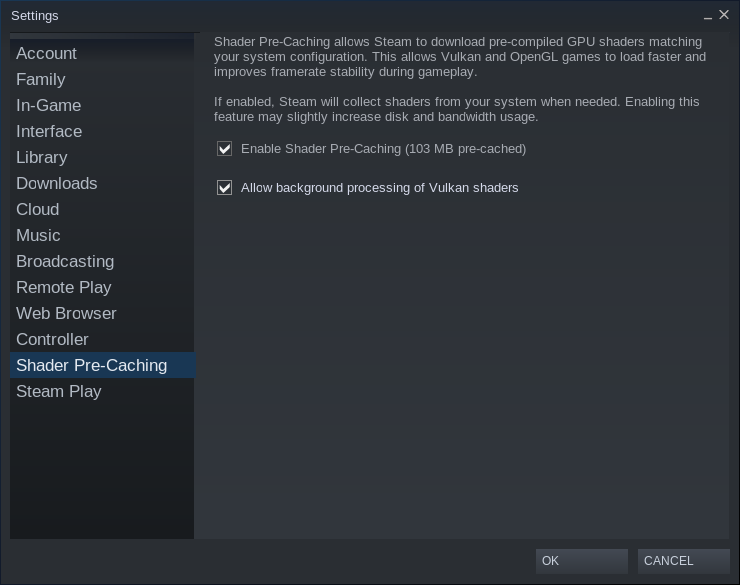 The Shader Cache should now start generating and saving the cache for that game.

Note: This has caused a problem for at least one person. I also don't know how it interacts with the latest Mutter VRR

For whatever reason (maybe me not understanding something) vblank_mode=0 still leaves me with a weird laggy display and screen tearing. This fix shouldn't hurt and it works for me. Do:

If you don't want to specify launch options for every single game you can put known safe options into /etc/environment so they are enabled during login. To do this:

If you are on a recent Asus notebook, see asus-linux.org for guides on how to properly configure NVIDIA drivers and support for configurable fan curves.

I use the following commands to set fan curves for the Performance power profile with asusctl. You don't need sudo for these:

Warning: For me, installing Lutris made games run worse. I don't yet know why, however games became extremely choppy and unplayable. Removing Lutris fixed this(!)

With all the above config, you actually shoudln't need Lutris.

You can install Lutris, which provides a single interface for all your games, and runs games with community optimised settings.

That should be it! Run Lutris to start and configure games from Lutris. If you have any problems, you can run lutris -d to see what might be going on.

🔗What do the flags do?

Note: This has caused a problem for at least one person. I also don't know how it interacts with the latest Mutter VRR

If this site helps you and you want to contribute we welcome you to help with development, search for issues, join the discord, and add to this website.

You can also donate

Your support on Pateron or Paypal helps us buy ASUS devices for development to support new features and drivers.