Linux guides and tools for ASUS Notebooks and Gaming Laptops

If you have any additional info whatsoever, please please please open a PR at the gitlab page. It was incredibly hard and time consuming to get to where I did and I would love to make a definitive article about this.

Please note that this article is WIP.

I (Luke) recently took up kernel hacking just so I could get my fancy new laptop working on par with Windows under Linux. The first step of that journey was to get the internal USB keyboard working correctly with all expected Fn+Key combinations emitting correct key codes, keyboard backlight brightness control, keyboard backlight effects, and per-key LED settings. It was a fair amount of work but mostly pretty easy once I got the USB packets required.

Next up is sound. And since this part was actually pretty hard to find infomation about I'm going to write about what I did.

For my laptop, an ASUS GX502GW, the audio jacks didn't work. For another laptop the ASUS G14, the laptop speakers didn't work, nor did headset mic. In general something won't be working as expected, or on par with Windows. Laptops seem to come with a variety of parts to make sound - this laptop used: Intel, Nvidia (for HDMI/DP sound), and Realtek for the codec controller. I think most laptops use the Realtek codec.

The problem lay with the Realtek. There's a bunch of different ones, and different configurations, and then vendor customizations on top of that. Total minefield of garbage as bas as Android versions.

The first thing you'll need is Windows installed - so don't wipe it out until you get some information. Second thing you need is RtHDDump_V236.zip; a tool I had great difficulty discovering actually existed.

You should get dumps from this tool with as many different configurations as you can relating to what doesn't work correctly in Linux. So if the jacks aren't working then plug in a headphone then dump, a headset then dump to a new file, a mic, dump to new file again, and leave them unplugged etc. Make sure to name each in an easy format like win_codec-unplugged. Put these somewhere you can access them in Linux.

Next you need to get Linux dumps, which is dead easy compared to Windows. Run these commands:

then we need to find the Realtek codec path, do ls /proc/asound/ and see how many card<n> directories there are. For each do grep "Codec: Realtek" /proc/asound/card<n>/codec#0 to see which contians that (replace <n> with card number.

Two easy things to check are pincfg and verbs. pincfg being the easier one of those two.

Open a windows dump (any of) and at the top of the file you'll see similar:

So let's note the lines that changed:

And in the linux dump these correspond to:

I've left some info off which we don't need to worry about yet. Node 0x15 is a Stereo Amp-Out with OUT HP EAPD Detect capabilities. Interesting... the others are input amps. Sometimes the pincfg is enough to get you started on the right track (as it was with the GX502 and GA401). To quickly test this sort of thing the Linux kernel gives you a nice gadget in the form of a 'firmware patch' you can have applied on boot - let's try it.

which changes your line to match. Reboot, and see what changed with the pincfg.

Now is the time to learn about hdajacksensetest. This should be available in alsa-tools in your distro. The node 0x19 for me is a mic input on the headset. Plugging in a headset and running hdajackretask showed

There's another tool; hdajackretask. Let's run that one. When it opens you'll see a drop-down menu - select the ALC codec, and then Show unconnected pins and Advanced override. There's a lot of nodes to go through sorry.

Each node has Override, Connectivity, and Jack detection. Between this and hdajacksensetest we should be able to discover which node the headphone jack is. For each node that has a device selection of 'Headphone' available I set

and then checked results with hdajacksensetest, then unset them if there was no change. The node I wanted is 0x21. 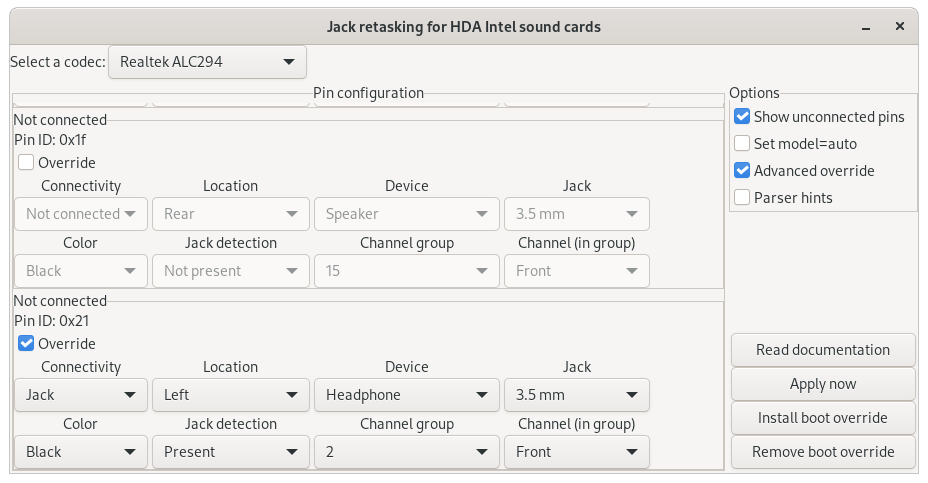 While you're in this page, you can set the jack details for the jacks you know to correctly match their actual physicals. The channels should match the Windows driver channels though, e.g, 0x01A11050 is front, channel group 5 (50).

When you click Apply the app spits out what was changed in the terminal:

Did we get all jacks? Great. Reboot, and onwards in to the woods.

Verbs... I had jacks working by now. But no headphone sound, or mic. Now was time to divine the secrets of the cosmos through the power of verbs.

In the Windows dumps, at node 0x20 there is a whole pile of lines like Index 0x00 0x3004. Using whatever method you want, grab that block of lines and put it in a new file windows-verbs-no-headpone and do this for each Windows dump, while naming the file suitably. Next use vimdiff:

to show you which lines changed. Or do

You want to get yourself a nice little table like this:

You also want to diff the Windows and Linux dumps. Don't worry, you only need the 'no headpones' dump since we want to see what the Windows driver is changing from defaults. Grab the Node 0x20 block of Coeff 0x00: 0x3004 and convert to same format as Windows dump (use an editor with column select to change lower case to upper). The do a diff of the Linux verbs to Windows.

This is the pile I came up with (yours will be different):

Now it's time to test all these and see what they do. Most of them may not do much, if anything. To test you need 1. index, 2. verb. So for each, do:

but, I still had no headphone speaker sound. Time to dig deeper...

Apologies dear reader, I started writing this article on 2020-07-27, but then work took over all my time and I was unable to finish in a timely manner. Coming back to it now I have to try and refresh myself and remember what I did. Please bear with me (Raaawwww!).

To get any further we're going to need hda-analyser. Download and run that with sudo python2 hda-analyzer/hda_analyzer.py.

Okay so, about here I'm going by memory now. In that app you will notice a series of nodes; 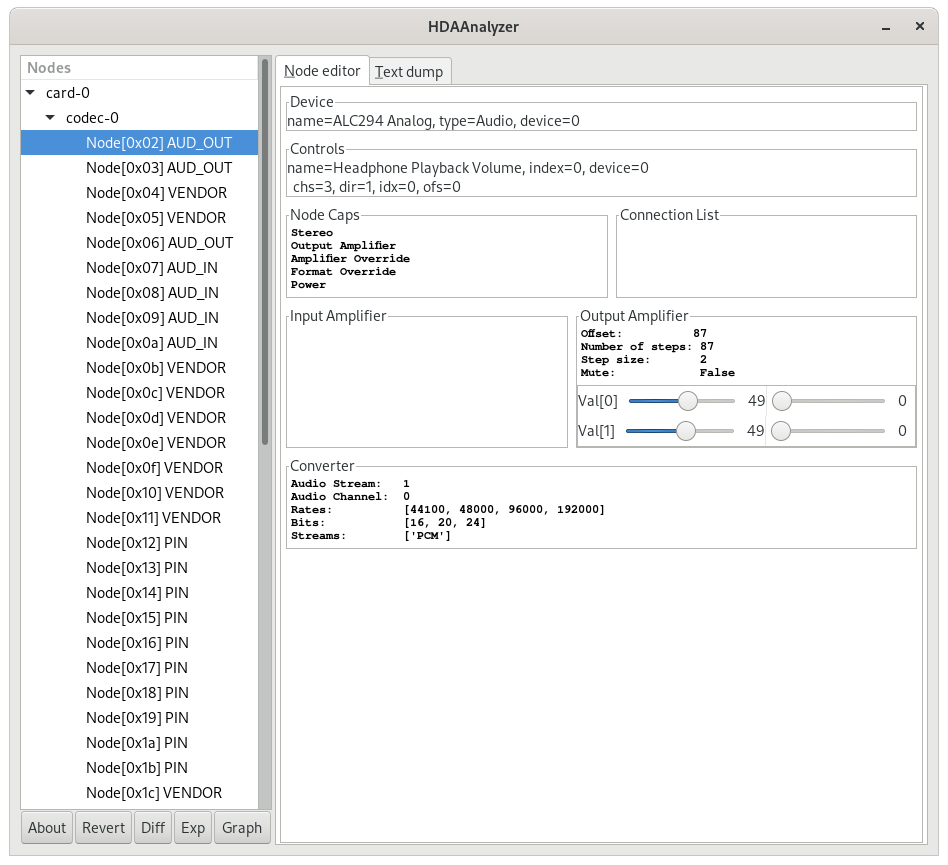 These are all connected in a map of sorts. For my laptop the headphones relied on:

You will notice in the above image that 0x15 has the Output muted. The same is true for 0x14 and 0x16. What happens if I go through and unmute each? Gasp!, 0x15 unmuted gave me sound out! Okay cool, so how do we set that with a verb?

Not quite... I must have performed an extra step, going by the kernel patch.

The below snippet is the code I wrote to enable the 0x15 amp in kernel:

See 0x15, AC_VERB_SET_PIN_WIDGET_CONTROL, 0xc0? There is a related item in hda-analyser. I must have been toggling through things in related combos to see what works. At this point I'd discovered that the verb setting 0x20 0x10 0x8A20 toggles the laptop speakers off, and while off, setting the above in hda-analyser gave headphone output but unplugging the headphones left laptop speakers off. That meant that 0x20 0x10 0x8A20 needed to be toggled.

Back to setting the verbs with hda-verb. The related verbs here are SET_PIN_WIDGET_CONTROL and SET_AMP_GAIN_MUTE. Running those with hda-verb gives you an output showing which hex value the command was, like so:

With all that out of the way and tested manually, we can prepare a new patch test:

Booting with this then using the following: